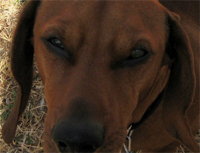 Remember when dogs didn’t go to the vet?  You just had dogs, they got ran over one day when they got out and you got a new one.  They ran wild out in the country, got bit by snakes, came home sprayed by skunks and they just went about life.  Those were the days…

When Mikey was about a year or so old he started limping and stuff and then wouldn’t even walk, so we took him into the vet and they took a look at it and they told us… get this…

So we had to give him pain killers for a day or so and his pimp limp went slowly back into his casual stroll.  This equals a whole knew form of domestication.

This past week or so we have taken both dogs to the vet, we spoke about that in our last Double Danger Dog Diaries and we found out Mikey has some eye problems.  The strange thing is we still have no clue what is wrong – I don’t know if the vet is feeling the same way, but they haven’t given him any diagnosis other than something is going on.  Thanks for the update… here is a check for a MILLION DOLLARS.

This weekend Mikey’s eyes seemed worse so we went ahead and took him in on Monday instead of Wednesday.  They said, it looks better… of course.  Well hell.  So they changed meds again (cha ching…) and instead of doing it twice a day now, we are doing it 4 times a day.  Now I love Mikey, he’s my boy and all… but 4 times a day?  I have never in my life taken meds that I had to administer to myself 4 times a day… doing the same thing to a dog, seems odd.

Oh and we get to take him back on Friday (cha ching).  Oh… and now we can’t go on a trip we had planned to see Anna & the girls… because we can’t kennel him while he is “sick”.  Well we could kennel him at the vet… for 9 MILLION DOLLARS A DAY.  We will just reschedule.

Mikey is doing well though.  One of the meds is some eyedrops and the vet said…

“These things will go from his eyes into his nose & throat and he will not like the way it tastes at all.”

Sure enough about 10 minutes later… Mikey hates life with a passion.  He is flinging slober & snot around like Hooch (from Turner & Hooch… come on) only downsized about 10 times.  We try to mix some treats in, but that doesn’t seem to do anything long term… more for the moment he is fine with it.  Then right back to slober slingin’.  Not a pretty sight.

On top of that, this medicine makes his eyes fully dialate and so he can’t go outside in the sun for more than 5-10 minutes or he will get headaches.  HEADACHES.  Hell.  The bad thing is, we can’t let Izzy outside and leave Mikey in, because they will eat our doors until they reach each other – so Izzy has been banished to her kennel until Mikey can resume his normal behavior.  She is pissed.

So are we.  Now both dogs are balls of energy that spend their nights roaming the house and all night you hear me yelling…

It is like someone hit the rewind button on life and we are back to 2 months ago when Izzy couldn’t handle sleeping for more than 2 hours at a time.  Totally awesome.

Did I mention the rash that Izzy has on her hind legs?  Yeah.  Stupid.

I think I want a bird.  Without its squeaker.