She wags her tail not knowing if I had just said it was treat time or if the nuclear bomb was on its way and it was shelter time.  It was true though… she is getting smarter.  I am not sure if it has to do with her being the second dog, so she learned faster picking it up from Mikey – or if it is her breed.  I’m sure it has to do with a little of both and of course two of the best trainers in the whole wide world.

Everyday, Izzy & Mikey play this game during lunch & dinner.  Izzy’s favorite thing to do is eat her food in 20 seconds.  The entire bowl in 20 seconds.  It is amazing to see her look down to a bowl full of food, look up and it is gone.  Now this isn’t Mikey’s first rodeo… he knows no matter how fast he eats, no one’s gonna make a lunge at his food bowl.  No other dog is likely to come along and grab a few bites while he isn’t looking.  These days, Mikey Danger is a seasoned vet, and he wastes his time on more important things like…

…keeping the birds in the tree.

…making sure all the pecans that fell of the tree are stripped down to shell only.

…barking at the “trash” man.

The game these two dogs play is pretty funny to watch and most of the time goes on for an hour.  When Izzy finishes her bowl of food, Mikey gives her a glance like…

“Don’t even think about it dudley…”

Izzy can not contain her excitement though, and she does think about it… constantly.  There is nothing in this world she would like more than to walk over, stick her face in his bowl and have the best 6 seconds of her life.  However, Mikey is not having it.  Izzy usually backs up and plops down in the kitchen for a while just staring at Mikey until finally giving up on him.  Mikey will eat one piece of food at a time, nudging the rest around and staring Izzy in the eyes with each swallow. 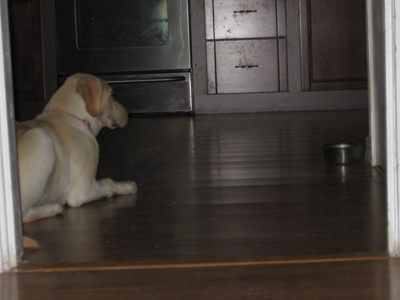 Iz will usually back off to the living room after 5-10 min. of this and this is where the real fun starts for these two.  Mikey then will slowly inch back into the living room and poke around a bit.  Izzy knows there is food in that bowl of Mikey’s so she inches a little closer (laying down the whole time, dragging herself like soldier) to the doorway between the two rooms.  Mikey sees it all and keeps her at a leap’s length while he acts as if he has not a care about Izzy wanting his food.

Our 50 pound friend will ease her way up from the floor and like it was slow motion, take step after step towards the bowl.  Mikey can see what is going on and will let her get closer and closer until finally he leaps and with a few steps has the young pup corralled.  At that point Izzy and Mikey start making out as both wants to be sure the other isn’t butt hurt about the whole exchange.  Just so the game can continue.

Fast forward a bit, don’t worry… you only missed this same sequence like 10 times at least.  Each time Mikey ending back at his bowl eating another piece of dog food.  Izzy back on the floor staring at the ration master.  Later in this match Mikey usually starts acting a bit careless.  Now the keyword here is “acting” a bit careless.  Each time letting Izzy get just an inch or two closer – then followed by the eventual cut-off technique.  Eventually the game moves completely into the living room and each round ending with a sprinting Mikey and a small altercation which now involves some mild growling and teeth showing.

The rounds that start from the living room are the ones to watch.  Each dog trying their hardest to act like they don’t know what the other is doing.  Then by the last round… it gets pretty crazy.  Usually it all ends with Izzy making a run at the dog food and Mikey making a run at her, tons of barking and dog screams… then Mikey trots back knowing there isn’t any food in there anyhow – hasn’t been in two rounds.  Victory is his.

Who said you can’t teach an old dog new tricks?  Shame on them.