For some reason our guest bedroom has been the hardest part of our house to decorate.  This is a bedroom that normally no one sees or cares to see, yet it haunts me in my sleep.  It all started when my cousin called and said that her, her husband and her beautiful daughter would be visiting the weekend after Thanksgiving.  Being the wonderful host that I am I decided that they had to have a bed and a nice comforter to go along with it.

We headed to Sam’s and had the mattress picked out, paid for and home in less than 30 minutes.  The comforter however was a different story.  I went shopping on Black Friday and was too often reminded why I hated shopping on that day, but I was determined to find a comforter for that room.  I wasn’t sure what I wanted exactly, but I knew that I would know it when I saw it.  I never saw it though, so I settled (which SOMEONE – everyday, tells me not to do).

In my mind I was thinking of our very first visitors in our brand new house and how I didn’t want them to have to use an old blanket to keep themselves warm.  Ever since I bought the comforter I’ve been trying to decide whether to just keep it or get another one that I liked better.  A couple of weekends ago I decided to keep it and like it, which was something that made James very happy (since we spent $100+ on it).

It has very calming colors and so I decided that we should bring in white furniture, something I have never before liked.  We already have a dresser that was mine when I was little and a shelf that has been around for awhile, so we decided that we would sand and paint them both.  The only other furniture that was needed was a bed side table… so we went on the hunt.

I’ve been trying to only buy things on sale and I am a self-proclaimed bargain shopper when I really put my mind to it.  We had looked at some pieces at Target and some other places online and they were all around 100 bucks which was WAY more than I wanted to spend.

So, off to Tuesday Morning, where we were not really sure what we were looking for and there it sat, the perfect little white table.  It was marked $69.99 and on sale for half price.  That was still a little bit more than I wanted to spend but a quite bit cheaper than the $100.00 we had seen elsewhere so we decided to get it.

Just the price I was looking for since it is the room, remember… no one sees or cares to see for the most part.  See below for a picture of $17.00 table… 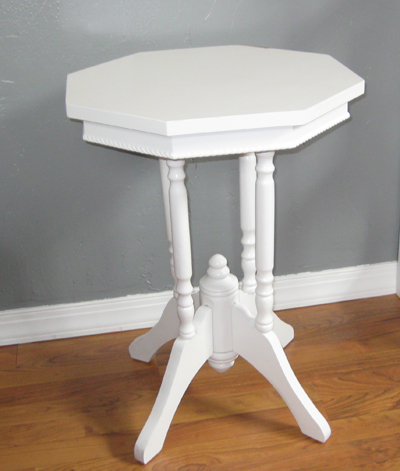