So about 3-4 months ago I was home sick (remember… the ear infection – ouch) and one of those infomercials came on and it just happened to be for “Mighty Putty”.  There is just something about Billy Mays’ sales pitch I guess, because about 10 min later I was putting my information in their website and hitting “Buy Now” faster than you can say… double my order.

At the time, I was really buying it so that we could use it to try and fix a hole in the Explorer’s radiator… not just because I wanted to spend 20 bucks on some random thing on the boob tube.  Perhaps it was a little of both.  😉  Funny thing was, I read online shortly after purchasing the Mighty Putty that it isn’t any different than the many epoxies available at your local hardware store.  DOH!

I still was thinking, cool – its ok… I will get it in and fix the radiator and all will be fine.  Everyone will think I was a genius, and the world will be mine.  I will go around fixing random objects that no one can figure out how to fix… because they don’t have Mighty Putty.  I will finally be the “cool kid”.

Problem with all this is a week went by and Shala’s car isn’t going to wait around, so her dad went and picked up some epoxy from the local hardware store… and he did his best to fix it.  No love though, as it didn’t seem to do the trick.  I thought, well I guess that stuff you can get at your hardware store isn’t the same – Mighty Putty is some kind of elite up-scale version of this stuff and when it comes in… I will be king.

Weeks continue to go by and we had to finally break down and just buy a radiator so that Shala’s car would not blow up.  So instead of looking like the pimp that I always thought I could be… I looked like a fool.  Thanks Mighty Putty.

After a month or so I thought, you know – I guess in my ear ached delusional state… I must have thought I ordered this so-called “Mighty” putty.  When in actuality, I hadn’t even been charged or anything for it.  I realized that I was an idiot and must not have given the correct info or something when ordering.  Perhaps being a cool person was just not in my cards.

Fast forward to about a week or two ago.  I login online to my bank and see that a charge went through that I didn’t authorize… or did I?  You guessed it, freakin’ Mighty Putty.  I ordered at the end of November and the first week of March I was charged for it.  Awesome turnaround eh?

So about 3-4 days later I check the mail and there it sits, Mighty Putty in my mailbox.

I was excited, hoping for a chance to redeem myself since I didn’t fix the radiator as planned, and now I had about 2 lbs of this mighty substance to use and re-use where ever I felt something needed “fixed”.  Sad thing is, I only had one thing that really needed fixed.   My Mom had this lamp that “someone” leaned up against and decided to break around the holidays.  Fat people… *shakes head*  This lamp would be my savior.

Before we get to deep in the lamp, lets get to the unveiling.  When I got the Mighty Putty, I quickly ripped open the packaging and snapped a picture of the contents – see below. 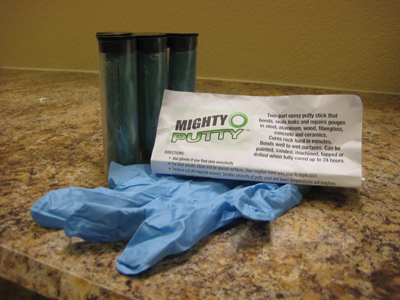 What came inside?  Well 6 tubes of your favorite epoxy, Mighty Putty –  one rubber glove for use however one pleases?!  Not to mention a nice little instruction sheet to help you in your mighty-putty-ing duties.  That is it.  I think after shipping & handling this all cost about 30 bucks.  At the hardware store… probably about 12 bucks or so.  Of course you would get more rubber gloves than just one – since it is hard to find the option to buy just one these days.  I have tried, believe me. 😉

As soon as I checked out what was included – then I had nothing left to do but get something “fixed”.  I grabbed the before-mentioned lamp and started doing work.

I must mention that when you chop off a tiny piece of this stuff and start mixing it (or kneading it), this smell… similar to buttholes & elbows starts to fill the air.  Instantly Shala looks at me, I shake my head and she looks at the dogs – trying to figure out which one of us let that one go.  It does smell horrible, kind of like death mixed with gas, mixed with old food mixed with whatever else turns your stomach.  They don’t talk about that in the commercials, that’s for sure.

I don’t let it throw me off course though, and before long I have that lamp whipped into shape, standing tall like a proud owner of Mighty Putty.  It wasn’t hard to use, obviously – it is just putty.  If you have ever played with silly putty, you can do this too.  Of course it is a bit tougher, but as far as ply-ability… you can do whatever with it.

After getting it all done, I let it set for about 3-4 days, just to be safe.  I sanded it down yesterday and I will show you what it looks like at the moment.  Of course I will paint it and get it looking somewhat normal soon, but for now you get to see it in all its Mighty Putty glory.  Enjoy. 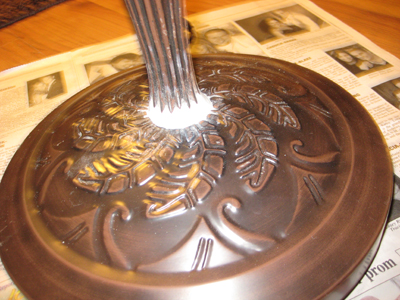 So did mighty putty work?  So far it has, of course it hasn’t been put through much of a test so far.  No one is pulling a Mack truck by the lamp or anything, but as far as standing there and not falling over… yes it is working.  I think for most applications this will work fine – hell I could see it working great for tons of applications honestly.  This was aluminum I believe and it worked ok.  I don’t see why it wouldn’t bond to practically anything.

My overall rating for Mighty Putty is positive.  Of course the amount of time it took to deliver it, the unknown fact if I really ordered or not and all that – definitely didn’t sit well.  I wouldn’t do it again, and my experience might not be normal.  However, it might be an everyday thing for the makers of Mighty Putty to do this to customers.  If you need a quick turnaround… try a different product.

Update: If you would like to purchase Mighty Putty of your own – CLICK HERE!  Help us help you!