We talked about it.  I know you doubted our skills and wondered if we were just blowing smoke up your collective rears… but that is not the case.  We haven’t received our stimulus check just yet, but there were a few things we could start now and not be strapped for cash down the road.

The first thing we needed to get started was the fence.  Reason being is so that we could get it up so the dogs would be forced to stay off the soon to be pool area.

Duh… we don’t want any of those soft rocks in our sand… that is why.  If you catch our drift.  Also it will give the grass in that area a bit of time to recoup.  Not to mention it also sets that section of the yard off and FORCES us to get our butts in gear.  A task in itself… believe me.

So we had budgeted about 250$ on fence for the pool area (which we are under budget on overall so far), since we were hoping to use a gate from the side entry to the backyard as the main gate into the pool area.  Well this meant that before we could even get started that we had to throw together a privacy gate for the side entry and take the old gate down and replace it with said privacy gate.

Well it wasn’t all that bad, but it wasn’t a 15 min project or anything.  A couple hours later we had the old gate off so we could see if it was going to be too big (Shala swore it was going to be) in comparison with the fence we were using.  Here is a pic of the old gate so you can see what it looked like… and for those of you keeping count… yeah Shala was right, I was wrong… shut it. So with the old gate down and the new one up, we were ready to get the fence up.  We decided to go with the empire fencing that we have around the garden – since the two areas kind of mesh together, so we picked it up at Lowes the day before and laid it out to see if we had enough.  We did, see below. So once we knew we had enough (and of course we had to grab one more tiny piece when it was all said and done), we started putting it up, it goes up pretty simply.  3 foot sections, one pole holds two pieces together… just make sure you measure your stuff out exactly.  😉  I don’t know why… it is so much more fun to make it up as you go, believe me.  For the most part it goes up rather quickly and before you know it – your drinking margaritas (since it is Cinco De Mayo after all) by the pool.  Ok – maybe it doesn’t go up quite that fast, but it does go up faster than other fencing.

After we got all of it up, we set the old gate in place (laying on its side) so we could start keeping the dogs out until we get the gate we are going to use fulltime in place.  So now we have the area laid out, and so the fun begins.  See below what it turned out like… and compare it to our original design sketch. 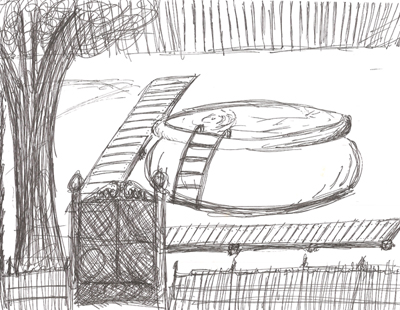 So now with the fence up we are set to start working that inside a bit.  We were going to sand the majority of it, but when you start thinking about how much sand that is… HOLY MOLY it is a lot.  So we are re-thinking it a bit.  We will figure it out.  Also we have plans for that old gate – but that is a future post, we hate to do away with it.  The old gate is too cool of a piece that can be used for something else.  Stay tuned for that.