The Garden is Officially ROCKED!

I spoke about how we began the “Rock the Garden” project last weekend, and it sat there all week making fun of me – telling me I was fat and I would never finish it.  It mocked me.  It hurt me deep down in my heart place.  We won’t go into that much.  Like I said… it hurts.

So as soon as the sun decided to grace us with its presence Saturday morning – I laid in bed and plotted the rock the garden project’s death.  It was still a bit cold, so I had a chance to hit up Westlake to grab some much need (and a few un-needed) things.  Some spray paint to “murder out” the newly acquired wheel barrel.  You don’t know what the term “murder out” means?  Cut the mustard and Ketchup (catch-up) already.

Murder out in regards to paint jobs, is when you take flat black paint and coat every single inch of it (in this case the rims, the barrel, the handles) – murdering any sense of color from existence.  When you look over at it… it looks like you took a knife and carved it from the world… leaving just a blacked out outline of it.  I will snapped a few pictures of it in the coming days and that way you can see what I am talking about.

Back to my story… I also picked up some soaker hoses for the garden.  We learned that you are not supposed to wet the leaves of most of your veggies, so the soaker hoses are the answer.  Also picked up some cantaloupe seeds for later down the road, bug spray (it is almost that time) and a nice pair of gardening gloves so my hands wouldn’t look like I had been carving chocolate with my nails at the end of the day.

Gardening gloves… I may have finally crossed over to female.  Forgive me guys.  If it is any better… I do have a nice pair of manly leather gloves that I move boulders, mend fences and choke-out live animals with.  **flexes arm muscle**

After I picked up that stuff – I had put off the rock laying long enough, no matter the weather… it was time.  Still probably 50-60 degrees at best, I headed out to get this thing kicked off.  You know how it is at first, you are all gung ho and start throwing rocks around like no one’s business… then you kind of tail off into the sunset hating life because your back feels like you have been skiing all day, but you have not skied in a looooooong while – so really your just falling and being drug through the water like a lure of some sort.  Benny can relate, right Benny?!?

I tried to pace myself, making my time and work as efficient as possible.  Instead of digging out a spot and then finding the perfect rocks to fit the voids, I would haul about 3 sq. ft. of rock to that area first, then dig out and set them all at once.  This turned out to be a TON more efficient than the last effort the weekend before.  We won’t talk about that.

After starting around 10 or so in the morning, lunch passed and I had made great progress.  By about 2 or so, Shala picked me up something to eat and I took a break.  Ok… so I took a few beer breaks here and there, I am human.  I found if you work for about 45 min. and then take about a 10-15 min beer break… things move faster.  It makes everything a bit more exciting.  And drunk. 😉

I ate some fajitas and got rev’d up to get this thing finished up.  I had about 4 foot to go on the long strip and then one side of the “cross” to finish it all.  With it being about 3… I had to turn it up a notch and get it done (since this was prior to the time change).  So that is what I did.  I powered through the last of the long section and within an hour I was starting on the last part of the cross.

This was where I hit a wall.  You know… when you can’t seem to get through that last part… you are stuck.  I remember one part where I was sitting down in the garden at the end of the last section and had about 30 min of work left really, and Shala came out and I was laughing at the dogs for something they were doing.  Well she didn’t know that, all she saw was me sitting in the dirt breaking dirt clods in my hands (myself covered in dirt) and giggling like a school girl.  I am sure she thought I had drove myself crazy.  I kind of had, but don’t tell her.  haha

So I finally said to myself…

“Time to get this crap done, enough with the bs.”

After it was all said and done, I raked the sections a bit, distributing dirt where it needed to be, leveling it the best I could.  Next I took all the nonsense out that I had found and threw into one corner (rocks, pecans, cement pieces and other random objects) and discarded it properly.

I hit the whole thing with a water hose to help settled all the dirt into the cracks and gave the whole garden a dousing as a whole.  It looked great when I finished it up and was happy that I laid this demon to rest.  No more rock.

Well… I thought no more rock, but that is a whole other story.  Check the pictures and tell us what you think.  Next step is making our rows and planting the goods (check the picture here).  We are waiting for this weather to settle down a bit before we take the leap.

See the pictures below: 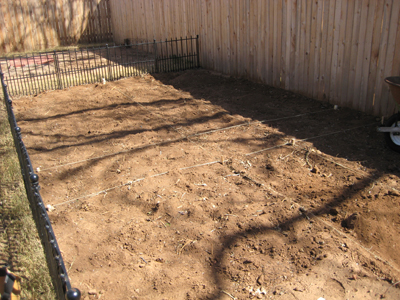 Before the stone was laid. 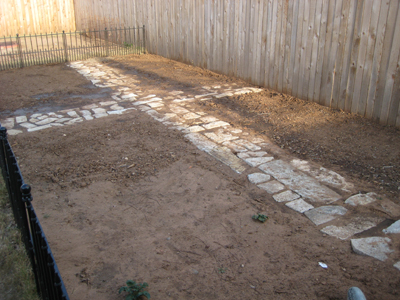 Garden after stone was laid.  Finally.

I thought it was cool how it turned out looking like a cross, the perspective is off a bit, it actually is even.

4 thoughts on “The Garden is Officially ROCKED!”