You know we have planted some vegetables for our garden in pots so that they can be big & healthy by planting time – well I just wanted to update on how that is going.

We have planted squash, cucumbers, okra, two types of tomatoes, 4 or 5 different pepper plants, basil, parsley and I think that is it for the most part.  That isn’t counting the potatoes that are in the ground already and the asparagus & onions that we just planted this past week.  We had some oregano – but we decided to let it go – since it wasn’t do all to well.  It is very fragile we have found.  😉

This past week our seeds emerged into little sprouts on the squash, okra & tomatoes – which we were there to snap some pics the first day they broke ground.  Below you can see a picture of the cucumbers seeing their first real sunlight.  Kind of cool if you ask me… I’m nerdy like that though. 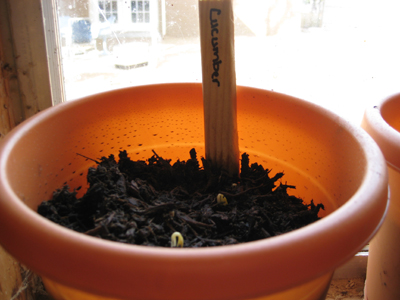 The other pics didn’t turn out so great – the battery was dying.  I will snap some better ones, but honestly they don’t even look the same – the squash are already so big.

So everything is going as planned so far.  We did acquire a tomato plant that is pretty big – so we could stagger them a bit.  One plant that would produce sooner than later, then have the others come in right behind it and produce.  Also – we picked up a few more pepper plants.  One jalapeno, one banana pepper (sweet) – little guys, but will produce quicker than the seedlings.

This past weekend we picked up seeds for Black Diamond Watermelons and we already had cantaloupe – so when that time comes… we will be good to go for the summer.  I can’t imagine pulling a 40 lb giant from the garden when we are BBQing, cracking it open and eating the heart out.  Sounds bad when you say it like that… but you know what I mean.

Everything is rockin’ & rollin’.  We have just a few things to do with the garden (besides plant all the stuff when its ready) and we will call it good.  Now we can focus on the pool project.  We will talk more about that soon enough!

1 thought on “Update On Planted Veggies”