What a Pleasant Surprise

Before flipping our flowerbed in the back yard we had to do a lot of preparation to get it ready to plant.  One of the most imporant parts was getting out the old plants and a couple of weeds that had popped up over the winter months.

There was one plant that we were sure was a weed, but when James went to dig it up it popped out with gardening soil around it, so obviously it had been planted on purpose.  We decided that there was no reason to kill this plant since it was already turning green, so we decided to transplant it and one other plant we found in there.  The side of our house was pretty boring with only one baby bush, so these two plants have found a home there.

A couple of days after transplanting it I went over to check on it and noticed two tiny blooms.  I was pretty excited since this plant was free and it was already going to give us some flowers!

About a week later these beautiful purple and white flowers emerged. 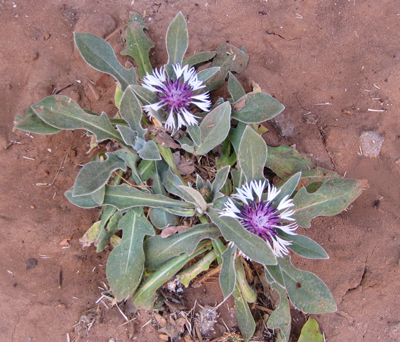 Since we are just starting this whole gardening thing I of course didn’t recognize the flower and had no idea what it was called or how to go about taking care of it.  Thanks to the wonderful internet I found that this is a Centaurea ‘Amethyst in Snow’.  It is a very drought tolerant plant and loves the sun.  Living in West Texas these are two things that you look for when buying plants and I was happy to find out that it wasn’t going to be a high maintanance plant.  We already have enough of those!

If you want one of your very own visit Wayside Gardens.  They sell them for $9.95 and are good for zones 3-9.  We are actually in zone 10 but they will be fine if you water a couple of times a week.  Obviously they are pretty hardy since they lasted all winter with no care at all. I’m going to be a better mother from now on though, I promise.