We were cooking breakfast for dinner last night (if that makes sense), and the dogs were at our feet and causing chaos in general… you know, being normal.  Anyhow, I started long ago with Mikey – but just never followed through with the fact that I didn’t want him in the kitchen while we cooked or ate.  My Brother used to be real strict with his lil’ dog as far as the kitchen being off limits, and I guess it was my attempt to be more like my big bro.  Mikey adhered to the rules long ago, but a few times I must have forgotten and before long it wasn’t an issue any longer.  Funny how things work like that huh?  One day it is a big deal, the next it is trivial.

Anyhow, last night I was being pushed all over the kitchen by the 55 pound-feline-like-dog that we call Izzy.  She likes to be amongst your legs and rub against them like a cat would… only problem is she is as big as a little bitty mini horse (for those that watch Rob & Big).  This makes her cat-like ambitions turn into a tornado of tail whips, claws to the feet, an occasional knee bite and anything else she has perfected since last meeting your shins.

While this circus was going on, I came to the realization…

THESE DOGS AREN’T EVEN SUPPOSED TO BE IN THE KITCHEN!

See… now it is an issue again.  I immediately started in on “Get out of the kitchen!” and “Sit” and “Stay” commands – like somehow they will know what it means (well Mikey does know most) and they just happily wag their tails and hover where ever I point.  Perfect.

Mikey is a bit confused lately on the “Sit” command, he thinks it is “Speak” and constantly barks.  Izzy has been good at learning sit, and even stay – but when I utter the word… “Sit” and Mikey barks, she thinks it is crazy time.   Amid the chaos I am wondering if it is time to just grab some adult beverage, lay in the floor and give up… but I don’t, I remain a good parent and continue to shout and curse the animals into submission.

I finally get the dogs backed up into the living room to kitchen entry way and stable.  Occasionally I have to reassert my dominance with a quick “IZZY!  Stay”, then Mikey barks and Izzy wags her tail and goes back into crazy time.  Chaos again.  We would have it no other way.

I told Shala last night that it was hard trying to train two dogs at the same time in two different languages.  She cocked her head and looked at me like I was crazy.  Which was half true, but one is a wiener dog, the other a lab… they definitely speak two different dialects?!? Right?  I talk to each of them in their own way.  Izzy is spoken to in a sweet loving girly tone, while Mikey gets a more manly BIG DOG tone that speaks without nonsense and giggles.  Men don’t giggle.

The whole point is the fact that they both had to be spoken to at the same time, controlled each in their own way.  Neither was working, since Izzy would misinterpret what I was saying to Mikey and Mikey getting confused by the “Sit” command directed at Izzy… instead of having two dogs sitting quietly at the kitchen entry way, we had two dogs confused as can be.  One was eating her foot and wagging her tail the entire time.  The other barking like a mad man, wondering where his treat was for “Speaking”.  Chaos I tell you.

After the chaos died down a bit, the two dogs were quiet and sitting just like angels on clouds at the doorstep of heaven.  I told Shala that I bet Mikey was in there saying to Izzy…

“You screwed this up stupid, seriously… I used to chill in the kitchen and eat anything that hit the floor.”

“Now you come along, and we are banished in here and I don’t even get treats for speaking anymore.”

He was right.  Mikey did get free roaming rights to the kitchen for a long time before Izzy came into the picture.  Not counting the first few times when we were hard on him and chose to keep him out of the kitchen.  Now with Izzy being around – it is just overload and so he gets punished for it.  Welcome to the real world big dog… that’s how things work sometimes.

After getting tired of sitting at the living room to kitchen entry, Mikey got up and I’m sure he thought to himself…

“Izzy, your an idiot… there is a whole other way to get into the kitchen and it is around this way.  Technically… it is the dining room and if we sit in there, they can’t be mad – since it ISN’T the kitchen.”

He is a brilliant lil’ wiener.  In about 5 seconds he had made his way to the dining room entrance and pokes his head around the corner as to say…

We didn’t know what to say honestly, we laughed with each other about how we had trained dog to be as smart as he was.  We were taking pride in our dog finding a way to duck the system. 🙂  My man.

Izzy sat at the living room to kitchen entrance oblivious to the fact that her Brother had found a loophole.  She is such a beautiful, dumb dog.  She fits in perfectly with the rest of us. 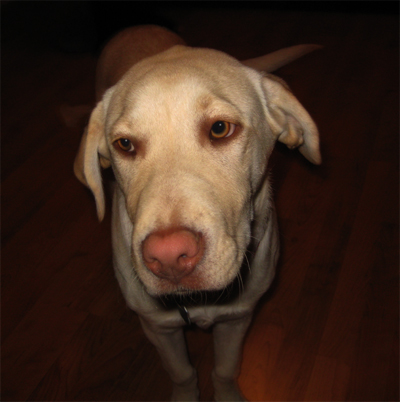 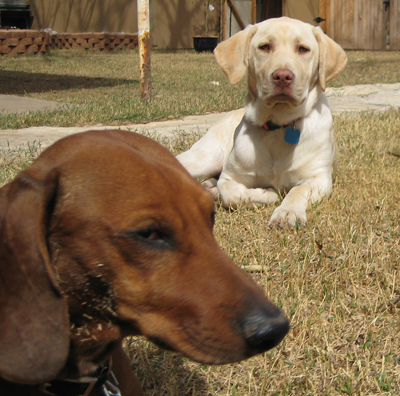 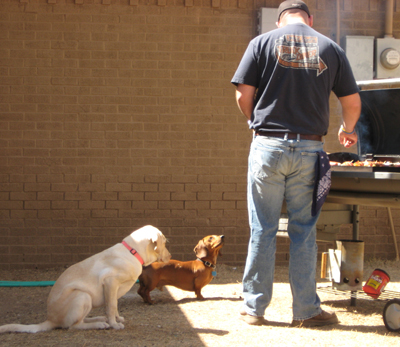