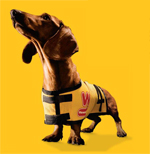 So the City of Odessa (our sister city) opened up a new Wienerschnitzel on Tanglewood & Esmond this past week and since it has been years since I have eaten there (can’t speak for Mashala) – we decided we would run over there and grab some chili & cheese slathered something or other and head back home.  No big deal, just eat a little sumtin’ sumtin’.

About 2 or so we decide to head that way, thinking it wasn’t really “lunch time” so we would miss the rush and get some greasy goodness pumping through our veins.  Before long we hit Tanglewood and see a line of cars that were about 30 cars deep.  HOLY HELL. 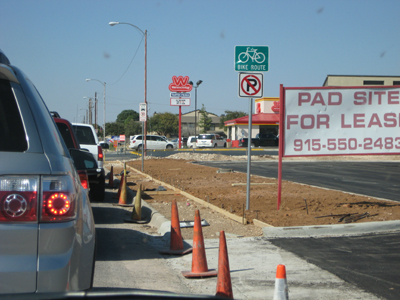 Thinking it wasn’t a big deal, I mean how long could it really take?  It is fast food right?  We just pulled up and began snapping pics and laughing – having a joyous time waiting for our chili cheese covered nonsense. 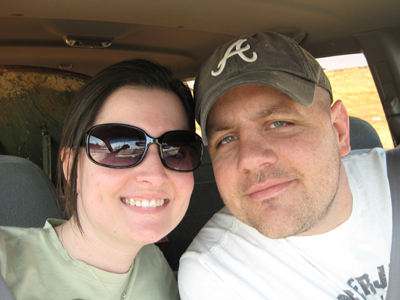 Lots of folks drove by and you could read their lips that were saying “OH MY GOSH” or “HOLY SHIII” as they kept speeding by.  Some people honked and gave us the “GO GET ‘EM!” type of gesture.  Most just shook their head and mumbled something about our Mother’s not holding us enough or how we were on some sort of drugs.  We smiled and waved.  Or took pictures of them.

We had time to kill.  Obviously.

After 40 minutes in line and the lack of movement all together – we were debating if this really was a smart thing to do.  However, our Mommas didn’t raise quitters.  We were raised to go after our chili cheese items with passion and vigor. 😉  So did we leave the line? 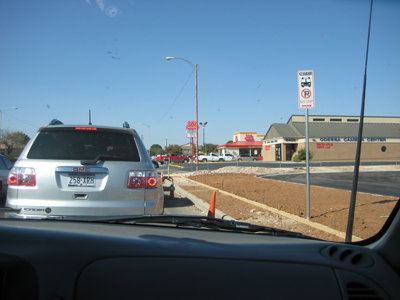 Our buzz from starting the journey was starting to wear down a bit after an hour in.  We had taken pictures of about everything you could think of – I would look over and Shala is taking a picture of a road cone.  I laugh for a sec and realize this is time that we will never be able to get back.  My mood changes a bit. 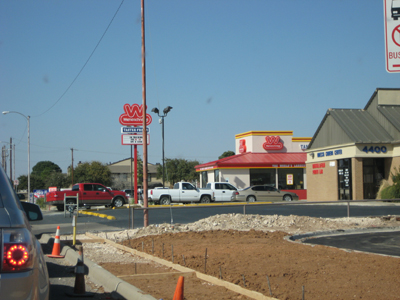 I was fighting a headache the whole time, didn’t think it would take 3 hours to get some food – so I was thinking… I will just medicate when we get home.  When we hit the 1.5 hours mark I was thinking, I would lick a toad if it meant getting rid of this headache.  No toads, I did manage to ask Shala if she had any drugs – she said… yeah.  DOH!  I should have asked an hour ago.  She pops open an Advil bottle to find – ONE pill.  Shite.  Oh well… better than nothing I suppose.

She reaches over to give it to me and it falls in the crack in between the seat & the console.  Amazing.  Are we being punished for our devotion to chili & cheese?  Or our stupidity for waiting in line this long?  Both… most likely.

After a bit of fishing and fumbling – I got to eat the hairy nugget of medicine.  Mmm.  It would have been better with chili & cheese.  Oh well.  Not many things that wouldn’t be better with the two before-mentioned condiments.

So now we are at the 2 hour mark and FINALLY we reach the parking lot.  That ill will that I once wished on Wienerschnitzel is now starting to subside now.  We finally get a whiff of the chili and the cheese being poured onto random objects and packaged and sent out the window.  We can see inside, which for a short time seemed like the place to have chosen.  After seeing the people packed in (faces stuck to the window) there – we were glad to have got to spend the time with only the two of us in a small American SUV. 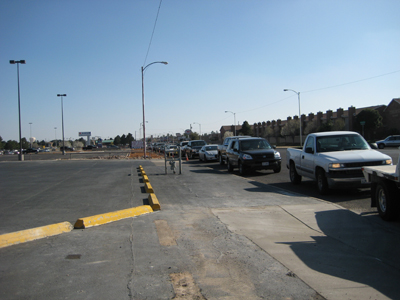 The next 30 minutes seem to fly by, OH WAIT…

Did we mention that Shala’s parents called while we were in the parking lot and gave us their order!!!  We fought it for a bit, finally opted to pick up their food as well.  For a large price. 😉  Only kidding.  We obliged and before we knew it we were driving off into the sunset – practically… since it took 2.5 hours to get the food.

What did we learn?  Nothing.  We did get to spend 2 and a half hours together laughing and fighting and snapping pictures and doing things we never have done.  We did get to have heartburn for 2 hours afterwards.  The food wasn’t all that great, but the adventure made it all worth it.

For those of you that are wondering exactly where the new Wienerschnitzel in Odessa is?  Check the map below for the location: